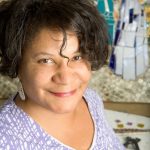 Los Angeles native Karen Guyot Cheval developed an interest in art at an early age.  As a teenager, her exposure to the contributions and influences of African, Asian, Native American and European art, led Karen to hone in on her natural abilities as a visual artist. Guyot Cheval’s work is strongly influenced by nature, period photographs, and religious iconography. She works in a variety of mediums but has found her niche as a mosaic artist.  Karen was introduced to making mosaics at the Orange Door under the tutelage of Luis Santos.  She studied at the Santa Barbara School of Mosaic Art, received her Bachelor of Arts degree from the University of California, Los Angeles and earned a Master of Science degree in Education from Mount St. Mary’s University in Los Angeles, California.

“I am redefining myself as an artist through my mosaics.  My premier body of work, The Kern Series,is a series of mosaics depicting events in the life of Kern, a school girl who loves education and nature.  Kern is me!”   Pieces from The Kern Series are featured in the tribute book, A Time, A Season – A Visual Tribute to Oprah Winfrey.